Brest Bretagne Airport is committed to sustainable development and reducing its impact on the environment.

You may find below our environmental commitment (Click to enlarge and browse the document): 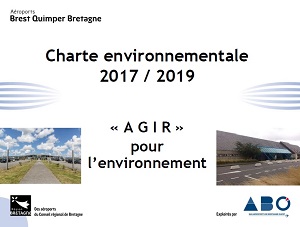 As part of this process, the airport launched, in early 2016, the Airport Carbon Accreditation certification program. He obtained his certificate Level 1: Mapping on 5 September 2016 and thus joins the 112 other European airports already certified.

The Airport Carbon Accreditation program is the only carbon management certification program for airports. It assesses and acknowledges efforts to manage and reduce carbon emissions through four levels of certification:

The Airport Carbon Accreditation program was launched by ACI Europe to certify airports in their carbon management approach.

ACI defends the interests of airport infrastructures and promotes professional excellence in the airport management and operations. By fostering cooperation among airports, global aeronautical organizations and financial partners, ACI contributes to the safety, security, efficiency and environmental responsibility of air transport.